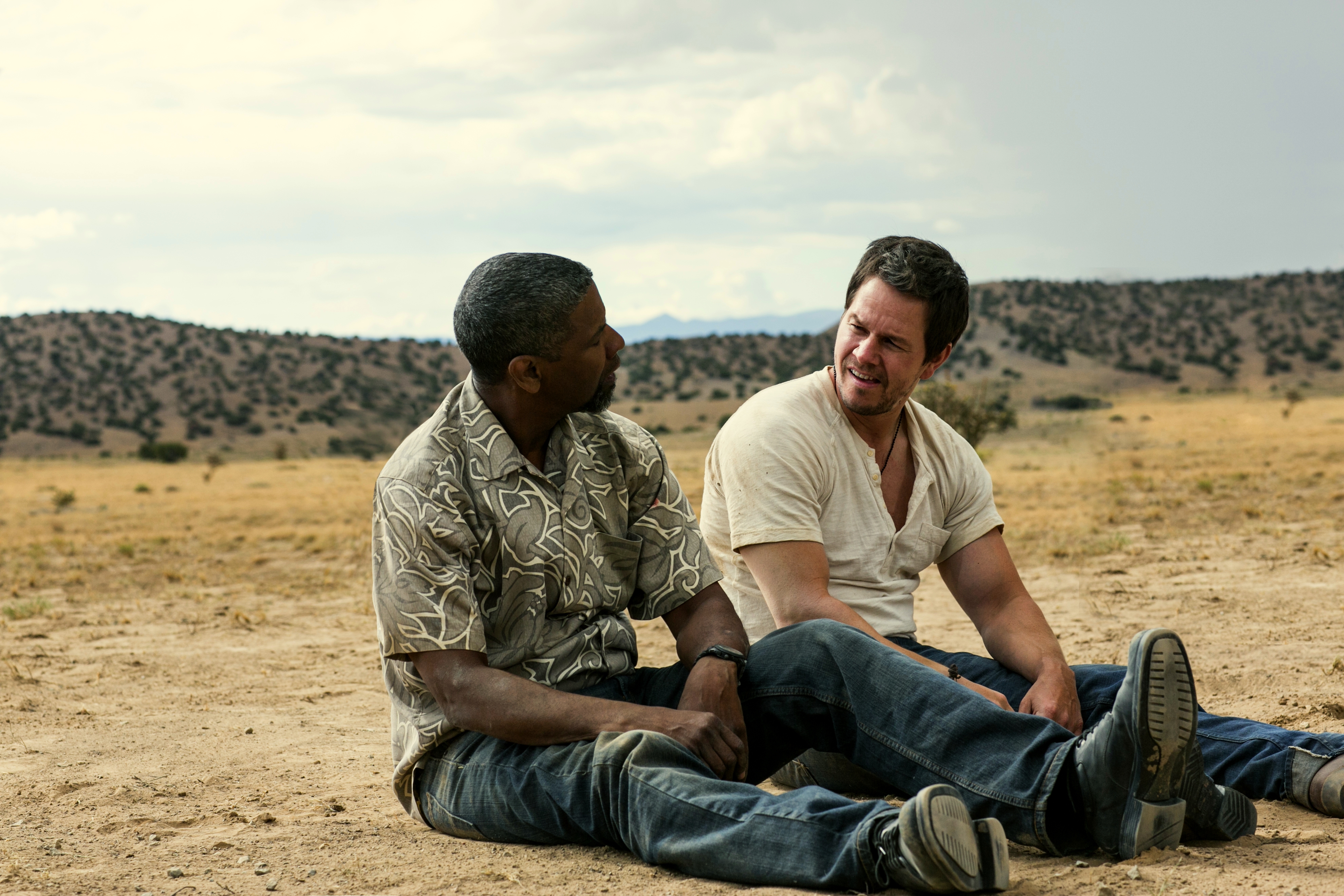 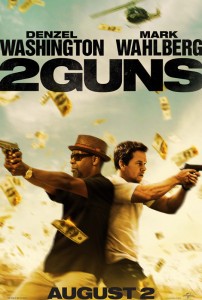 Contraband was an exercise in complete complacency for me. Director Baltasar Kormakur crafted little more than the standard action flick with the assumed hook of it centering around smuggling on cargo ships. The film mixed a few “family first” morality tales in there and sported a strong enough cast to help the material rise above something that would have otherwise been nothing more than a barely acceptable TV movie. The same could be said about Kormakur’s follow-up, 2 Guns, but I had a lot more fun with this one than I can even remember plot points from Contraband. While the film fits squarely into the genre of shoot-em up, buddy action flicks 2 Guns doesn’t allow itself to be restrained by the conventions while at the same time playing to the strengths of those kinds of films. Neither of these characters are cops and neither of them really care to be friends (though Wahlberg’s Stigman is certainly open to the idea), but while it is the odd couple chemistry that keeps this train moving I was also impressed with just how far the movie was willing to go to try and avoid the standard cliche’s of its genre while still being more than willing to include a Mexican drug cartel and scenes with massive amounts of gunplay rather than intelligent or calculated conversation. Beyond this there is nothing especially insightful to be said about the film, but for what it’s worth there should be a level of congratulation here for the simple fact that it isn’t horrible. Truly though, with such hot commodities as Wahlberg and Washington in the leading roles that was never an option. Both guys have a strong following, much of which likely overlaps, and the sole fact they were teaming up was going to make for a good time at the movies even if the story offered nothing. That there is just the smallest amount of substance here that makes the experience all the more stimulating is a plus and reverts it from expectations that it might be one too many times Denzel has played a cop and there was no other fate for this than being dull. At the very least 2 Guns is entertaining and in reality that is what audiences go into this kind of movie for; that it offered this value in spades makes it nothing short of a success.

As for that story it goes a little something like this: Robert “Bobby” Trench (Washington) is an undercover DEA agent (this is no spoiler, it’s in the trailers and we learn of it very early on) who is attempting to get in the middle of some heavy drug dealers and put away the head of the operation Papi Greco (Edward James Olmos) and comes pretty damn close, but is spoiled in the final steps by Greco himself. Bobby has recently acquired a partner in the form of Michael “Stig” Stigman (Wahlberg) and sees an alternate route in pinning Greco when Stig tells him of the spare millions Greco puts away in a small town bank for when he visits his family in Texas. Their plan is to rob the bank, but when they go about this and end up with more than Greco’s spare change ($43.125 million as we’re told repeatedly) things get messy as several different organizations come forward laying claim to the cash. While Wahlberg is more second tier to Washington’s laid back agent, his past is more unclear and thus gives us wiggle room to wonder what he might do next. While who Stig really is allows James Marsden’s Quince to come into the picture Bobby also has people on his side, namely a love interest, Deb (Paula Patton), that get involved and contribute to the many twists and turns this story takes along the way. Only adding to the confusion is Bill Paxton as Earl, a psychopathic oddity who finds pleasure in finding new places to play Russian roulette. Besides Wahlberg and Wshington’s chemistry Paxton is the next best thing in the film. It is clear from the trailer that he would be the main antagonist, but every time he walks on screen here his presence is clearly known and the looming fear of what might happen next is one of ridiculous tension. While the players elevate the game, the story itself is so convoluted its silly. There is no way in hell any of this would actually be plausible as there is so much double-crossing and back stabbing going on it is hard to keep up and the pacing doesn’t help, but in fact is probably intent on not letting you get caught up on the details. The characters ask the questions the script wants to answer and feels it should be enough to satisfy its audience.

Going for the pure popcorn entertainment that summers usually elicit from studios some films can get too caught up in themselves to realize their purpose. That isn’t to say I don’t appreciate when a super hero film digs deep, but when you have a premise that is almost a joke in itself (or has been made that way by the now aging stars who carved out the genre in the first place) and you try to play it as straightforward and real as possible it is inevitably going to be received with a fair amount of laughs from the audience. Whether Kormakur learned his lesson from Contraband or not it is clear that he at least took away a few notes and that one of them was to simply let his actors do what they will and create memorable characters that, if the story won’t stay afloat on its own, will at least carry it across the finish line. That is exactly what has happened here. Washington isn’t doing anything new and it is almost sad as it feels the charismatic actor was unsure what to do in the wake of Tony Scott’s death and needed to fill the void of making a throwaway action piece with a saturated color palette to the extent that he took on this project. Obviously Wahlberg has worked with the Kormakur before and if he was willing to re-team or at least do the director a favor by starring in 2 Guns why not do it big and offer Washington some consolation by inviting him to join the party? Granted, Washington has his pick of doing whatever he wants, but he has always been smart not to star in bloated, high budget projects that stood the chance of losing money and instead played it safe and made projects he knows people like to see him in only every now and then throwing in something like American Gangster or Flight. Here he does the same thing we’ve seen him do time and time again, but dammit if the man isn’t commanding in everything he does and as the smooth Bobby to Wahlberg’s smart ass, high wired

Stig he is completely appealing and still able to come off as one of the coolest guys around even as he approaches sixty next year. On the other side of the equation Wahlberg has always had the talent for playing the comedic straight man, but here he is afforded the chance to play the full on funnyman. While his characters in movies like The Other Guys and Pain and Gain were funny because of their ignorance, Stig knows what he’s doing and knows how to use his quick wit and shooting skills to make a formidable point.

Both actors settle nicely into their roles and give us reason to continue watching even when the story presents them with perils that might otherwise be insurmountable. What makes 2 Guns even more of a welcome surprise is that it could have just as easily been turned into a PG-13 actioner and made a little more money while being even less authentic than it already is. Yes, the story elements get a bit ridiculous, but at least the characters are able to do and say whatever they want and the level of violence is allowed to go as gruesome as it needs. The film does a fine job of balancing the action quota with the laughs as I was laughing and smiling along just as much as I was wincing at what might happen next. There is no telling how many literal guns actually show up in the film, but there are countless anonymous bodyguards and security personnel sacrificed in the film, while even a Naval base isn’t safe from the havoc Bobby and Stig are leaving in their path. Paxton’s Earl, as mentioned before, has a particularly fine taste in torture and his character would be nowhere near as interesting or menacing were this watered down to a film teens around the world were allowed into. Kormakur has, in the end, crafted a thrilling piece of forgettable entertainment that is as slickly shot and edited as its story is convoluted. What matters though is that it has good actors, Olmos fitting into the rhythm of the film as nicely as its two leads and Paxton, while someone desperately needed to inform both Marsden and Patton they need not take their characters so seriously. I thoroughly enjoyed 2 Guns even if I didn’t believe for one minute believe our heroes would have actually been able to get out of the predicament their jobs place them in. I loved watching Wahlberg and Washington go back and forth with a specific style that allows the film to rise above standard action fare. Interesting fact is that neither Wahlberg nor Washington have ever made a sequel (though Wahlberg will be breaking that trend shortly with Ted 2), but if this makes enough money I can certainly see them both coming back around for 3 Guns if not for anything else but to save this pulpy gem from being banished to the lands of TV re-runs where its R-rated roughness will be forgotten in the edited version that viewers take at face value.

Related Topics:Movie ReviewsReview
Up Next