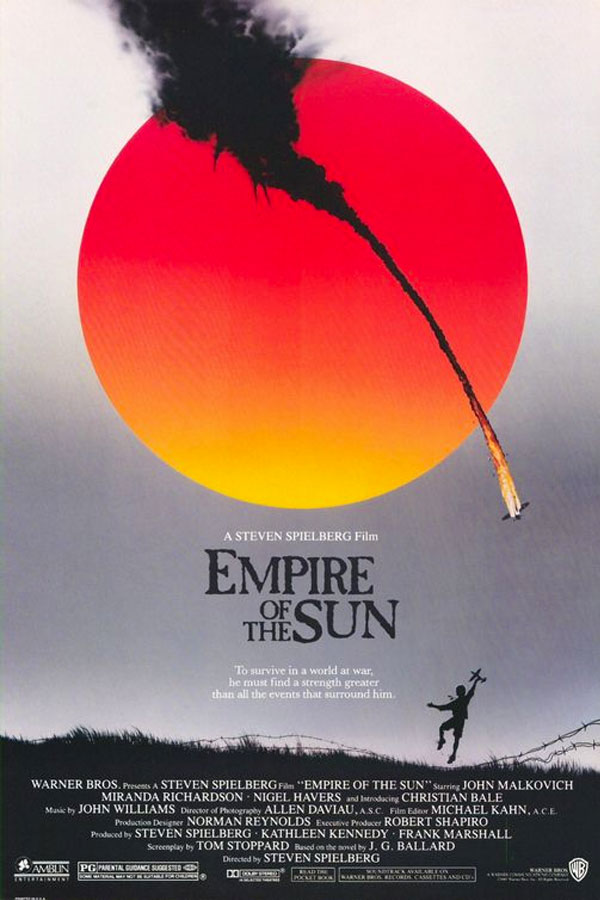 Steven Spielberg has directed and produced some of the most successful movies of all time, including: E.T., Jaws, Saving Private Ryan, Schindler’s List, Raiders of the Lost Ark, and of course, Jurassic Park, amongst (many) others.

He is without a doubt, one of the most talented and influential directors of our generation (or of any generation, for that matter) and at age 68, his career is still going strong, with the eagerly-awaited Bridge of Spies (starring Tom Hanks) set to be released later this year.

For me personally, Spielberg will always have a special place in my heart: I grew up in the 80’s/90’s, so I spent much of my childhood/youth watching Spielberg’s movies (often repeatedly).

I remember watching Jurassic Park for the first time (I was 8) and being absolutely blown away by what I was watching. I was so blown away, in fact, that even a couple of years after the release; I still watched it almost religiously most weekends (on VHS, might I add).

In recent years, I’ve started my own collection of Spielberg movie posters (which can be found dotted around my home), which you can have printed online for a relatively low cost from sites like VistaPrint or FastPrint for posters).

If you’re not sure which one(s) to get, no worries; I’ve shared some of my absolutely favourites below: 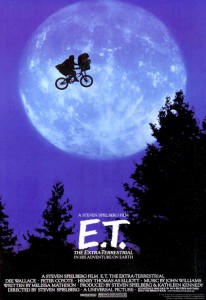 “E.T. phone home” – even if you haven’t seen this movie, chances are you’ve heard that line; it’s about as famous as movie lines get.

Despite being released over 30 years ago, the movie itself is an absolute classic, and the movie poster still looks as stunning as ever.

It features the iconic silhouette of E.T. and Elliot riding a bike through the sky, plus a few other details (i.e. the name, director, etc.)

It’s a brilliantly well-shot image that serves as the perfect reminder of a great movie. 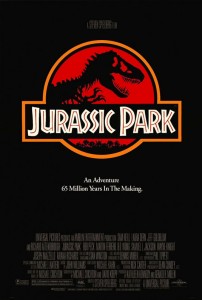 For me, this is one of the greatest movie posters ever; it’s clean, simple, yet still iconic and memorable.

The strapline gives you a small insight into what to expect from the movie, yet the poster keeps the insane nature of the special effects under wraps (until you see the movie, at least). 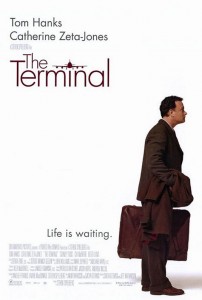 The Terminal was released just 11 years ago in 2004, but still, it’s become one of the most iconic Steven Spielberg movies of all time.

I absolutely love this movie, and I love the poster too.

For me, the poster manages to highlight the loneliness felt by Tom Hanks throughout the film. He has no home, no friends, and for the time being, he’s stuck in an airport, unable to leave.

It runs the tagline “life is waiting” – something I’m sure we can all relate to from time-to-time.

#4 – Close Encounters of the Third Kind 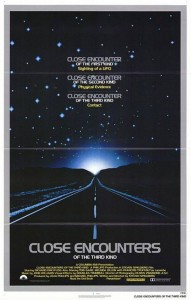 Believe it or not, Close Encounters of the Third Kind was released 38 years ago back in 1977.

Still, though, the movie poster remains one of the most iconic posters of all-time.

It’s a stunning poster that gives little away, although it does explain the concept of a “close encounter of the third kind”, which is of course, human contact.

This sets the stage for the movie perfectly, yet it also does a great job of keeping you curious. 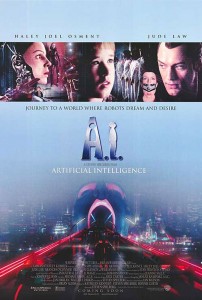 Artificial Intelligence often gets forgotten about when people think of Spielberg’s body of work, which I think is a shame, as it’s an absolutely brilliant movie.

Like most of Spielberg’s movies, it also has a great movie poster, too.

In my opinion, it’s somewhat similar to the Close Encounters of the Third Kind poster (above) in terms of the design, but I particularly love the colour scheme of this poster. It works wonderfully in plain rooms. 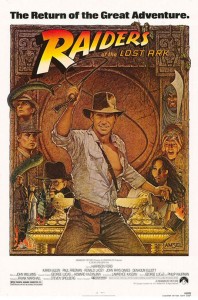 In my opinion, Raiders of the Lost Ark is the greatest Indiana Jones movie ever shot. It’s fast-paced, and Harrison Ford is impeccable in it.

I also absolutely love the poster for this film, as unlike many of the posters for other Spielberg movies, it’s features quite an action-packed and hectic design (which suits the style of the movie perfectly).

Most Spielberg posters tend to be quite simplistic and refined, so this makes a nice change. It’s currently on the wall in my spare room. 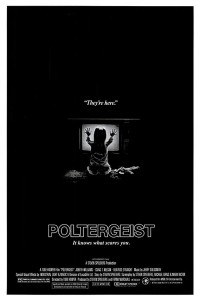 Poltergeist is one of the most minimalistic movie posters I’ve ever come across, but it certainly has a haunting quality to it.

It features nothing but a stark image of a little girl, sitting in front of a TV showing only static; alongside this is the strapline, “they’re here”.

With a name like Poltergeist, little is left to the imagination here; you know you’re going to be in for a scare-fest, but that’s what makes the poster so great. 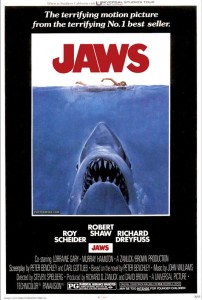 The movie poster for Jaws is perhaps the most iconic of all Spielberg movie posters, as the illustration of the shark seemingly about to attack a woman certainly sticks in your mind, if nothing else.

Combined with the stark red typography, it’s an attention-grabbing poster that tells you everything you need to know about the movie in just a few seconds, which is exactly what the designer (Tony Seiniger) aimed to do.

I also particularly love the red and blue colour scheme. 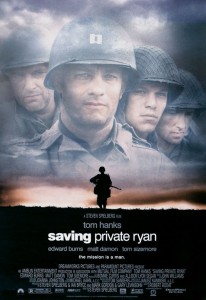 Saving Private Ryan is one of my all-time favourite movies; very little beats the action-packed nature of the opening scene, in my opinion.

It also sets you up for the overall premise of the movie, with the strapline “the mission is a man”, yet it doesn’t give too much away and still leaves you with a sense of curiosity. 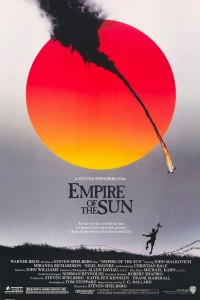 Empire of the Sun is a personal favourite movie poster of mine, as it’s ridiculously simplistic yet at the same time, absolutely stunning.

It’s all about the colour scheme here: the bright red/orange/yellow colour of the sun-like image would likely stand out on any movie poster, but combined with the washed-out background here, it has even more of an impact and no doubt attracted it’s fair share of attention from afar.

The silhouette of the child playing with a toy airplane is a subtle yet important addition, too, as it further invokes a sense of curiosity. 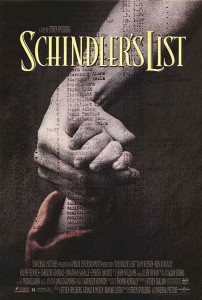 Schindler’s List: no Spielberg-roundup would be complete without it, plus it’s also one of my favourite movies of all time.

It’s quite a cryptic poster, depicting the holding of a child’s hand, overlaid with a list of names (i.e. Schindler’s List).

Although this doesn’t offer much insight into the movie itself, it does give you a sense of the emotional rollercoaster you’ll embark upon when watching the film.

Bio: Joshua works for a leading print and graphic design agency based in the UK. He’s always loved movies, and has a particular fondness for fast-paced action movies; his favourite action movie of all-time would have to be The Matrix.

Related Topics:Steven Speilberg
Up Next